“If I were truly mature, then the world would treat me as mature. Unfortunately, even my closest family think I cannot be taken seriously.”

The world premiere of History took place in April 1977 in Munich, Germany, directed by Andras Fricsay.
History (Operetta) has also been directed in Poland and in the Netherlands. 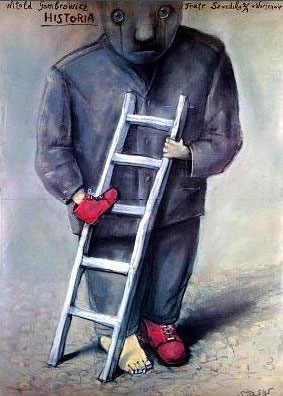 The Polish professional premiere took place in 1981 in Gorzów Wielkopolski, directed by Kazmierz Skoropski, who directed the Polish student production in Wrocław in 1977.
In the early 1980s, the country experienced a difficult political situation following General Jaruzelski’s establishment of martial law in 1981. In this context, Witold Gombrowicz’s text often served as a manifesto for freedom. 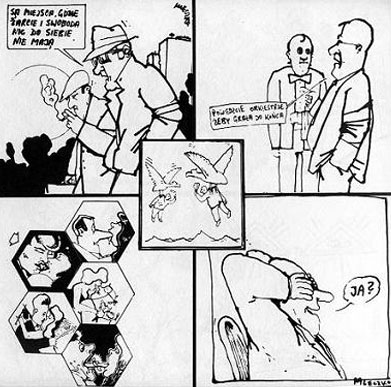 Drawings by Andrzej Mleczko for a production in Łódź, 1982. Above, at left: “There are places where freedom and food have nothing to do with each other.” At left: “Tell the orchestra they can play to the end.” Below, right: “Me?”

History (Operetta) inspired a dozen theatrical adaptations in Poland in the years between 1977 and 1990, one of which was for television.
This text also served as a launching point for an artistic “happening” that took place in Lublin in October 2004. To celebrate the centennial of Witold Gombrowicz’s birth, students conceived a dialogue between a polyester sculpture of Witold and the imposing monument of Marshall Piłsudski on his horse in the center of the city.