The word “Ferdydurke” appears only in the novel’s title—not once in the text itself. Witold Gombrowicz never revealed the mystery of the title; he claimed both that he had chosen it because it signified nothing and was difficult to pronounce in Polish, and that he had found it by chance in an English newspaper.

In 1984, Bogdan Baran hypothesized that the title stemmed from Sinclair Lewis’s novel Babbitt, which was translated into Polish in the 1930s. 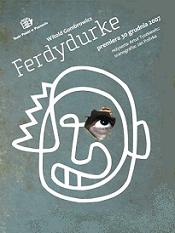 Poster for the adaptation of Ferdydurke by Artur Pawłowski, Poznań, 2007.

This hypothesized origin of the title was confirmed in 2000 by Professor Henryk Markiewicz, who discovered an unknown story by Witold Gombrowicz, Ears, in 1935. Ears was an apparent pastiche of a fragment of Babbitt. In this short text, we meet the character of old Ferdy Durkee, a store clerk. He is terrorized by Mr. Mouse-man, the owner, whom Ferdy succeeds in humiliating through teasing and, finally, by forcing him to undress completely. 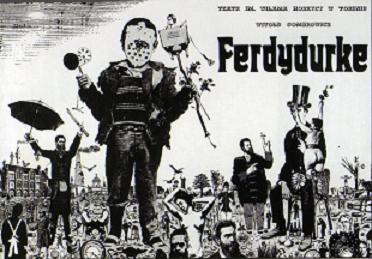 These explanations of the story’s title appear in the edition of Ferdydurke in the Complete Works edited by Włodzimierz Bolecki, Wydawnictwo Literackie, 2007, pages 402-402. The novel Ears can be found here as well, pages 263-265.