“And again, in her dream, against the background of a white wall pierced by a narrow window, a cloth, or possibly an animal, at any rate something moving, something horrible that moved in a manner so repugnant that both of them, Walchak and herself, paralysed with fear, helplessly awaited its approach. But this time she saw a bit more. She saw the piece of cloth writing in Walchak’s mouth as he struggled for breath... She screamed.”

Possessed takes place in Poland in the 1930s. Part of the action takes place in Warsaw, but the most important events happen in Polyka, in the countryside, where a manor transformed into a family pension and a haunted castle sit side-by-side. Several intrigues intermingle in the story, making a summary difficult—but two intersecting frameworks may be uncovered. 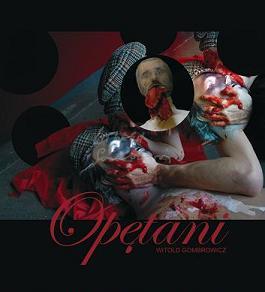 Possessed, stage adaptation by Krzysztof Garbaczewski, Wałbrzych, 2008. Photos of the production as follow below all by Bartłomiej Sowa.

The first framework is that of a destructive passion between two young people from different social classes. Walchak is a waiter, transformed, through his talent and ambition, into a tennis instructor. He comes to Polyka to train Maya, a young female tennis hopeful and daughter of Mrs. Ocholowska, proprietress of the pension-manor. Irresistibly attracted to one another from their very first training match, Walchak and Maya become quick enemies, to the point that they physically fight.
Maya pushes Walchak to his very worst. During a walk in the forest, she dares him to kill a squirrel that they are both fond of. Walchak hurls the squirrel against a tree with all his might, killing it. Terrified by Maya’s evil influence, he decides to flee. They both leave, separately, for Warsaw. 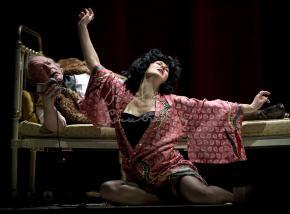 Once in Warsaw, Walchak returns to his old job as a waiter. Maya, thanks to her family relations, finds work as a secretary for the millionaire Maliniak, who takes her on in order to torture his mistress, Maliniak’s niece, who hopes to inherit his fortune. Maliniak force-feeds Maya delicious food that she has no desire for, while he forces his niece to diet. He also buys Maya sumptuous clothing in his niece’s presence.
Maya is unable to forget Walchak and seeks to find him. They meet at a bar and dance frenetically.
Suddenly, the millionaire is assassinated. Maya and Walchak suspect each other of the murder committed no doubt by Maliniak’s niece.

Maya and Walchak separate once again. Maya looks for him again, but this time with the help of Hincz, a famous clairvoyant. Walchak, possessed and desperate, returns to the locality of the manor, living at the home of a peasant, who turns out to be Francis—the illegitimate son of Prince Holsztyński. Maya and Hincz find Walchak and take him back to Polyka, where Maya’s fiancé, the Prince’s secretary, locks them together in the haunted kitchen out of vengeance. Thanks to Walchak’s courage—he succeeds in throwing a bewitched napkin through the window—the pair is delivered from possession. But the task has blanched Walchak’s hair white in one fell swoop. The lovers kill each other, finally triumphant over the forces of evil. 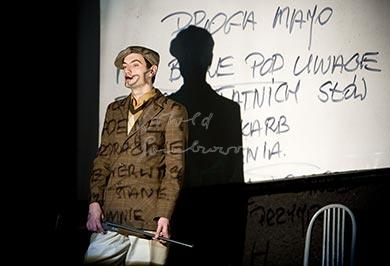 A second intrigue takes place entirely at the haunted castle. Prince Holsztyński has an illegitimate son, François. He does not officially recognize him, nor does he have him educated. He makes a sort of servant out of him. Francis revolts.
The Prince, overcome with remorse and in tears, asks for his son’s forgiveness. François does not forgive him, and, for vengeance, threatens to kill himself. Faced with the threat of his son’s self-destruction, the Prince locks him in the Old Kitchen (not yet haunted), which has been converted into a bedroom. The Prince sleeps in front of the door and tries for weeks to convince his son that the loves him, discussing with him through the wall. One day, the son disappears. From this moment on, the Old Kitchen is haunted. A napkin hung on a hook moves and twists incessantly. 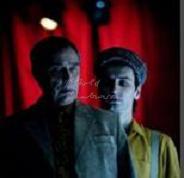 The Prince is now half-mad from chagrin and remorse. He engages Kholavitski, a distant relative, as his secretary, who thinks only of his inheritance. He tortures the Prince, even threatening to whip him. The Prince is completely under his control. At the same time, however, Kholavitski falls in love with Maya, who has long been his fiancée. For the same reason, Kholavitski is horribly jealous of Walchak.
By contrast, Kholavitski’s close position to the Prince is threatened by Professor Skolinski, an art historian, who has arrived at the castle to catalogue its works of art. The professor earns the Prince’s confidence by helping him organize the castle. Kholavitski is ousted, and the Prince regains his dignity.