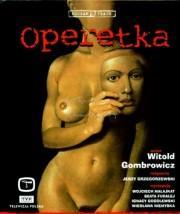 The DVD recording of the Operetta directed by Jerzy Grzegorzewski created for Polish television. This is a revival of the production from Teatr Narodowy, Warsaw, 2001.

As usual, Witold Gombrowicz wrote a summary of the three acts himself, as follows. This text is always included with Operetta as a kind of preface:

Before the First World War, around 1910.
A jaded rake and a debauchee, Count Charmant, son of Prince Himalay, is planning the seduction of Albertine, a marvel of a lass. But how to make Albertine’s acquaintance “without having been introduced to her?” Charmant has devised the following scheme: a pickpocket, a young scamp and a rogue who has been engaged especially for the purpose, will sneak up to Albertine while she is asleep on a park bench and will filch something from her—a purse, a locket … Charmant will then nab the pickpocket and without violating the rules of savoir-faire introduce himself to this marvel of a lass.
But what’s this? In her sleep Albertine has felt the pickpocket’s hand and dreams not of a thief’s but of a lover’s touch …, which is aimed not at her locket, but at her body. Henceforth, excited and enthralled, this girl will dream of nudity … and will lapse into sleep in order that she may once again experience that denuding touch….

But who should arrive from Paris on a visit to the Himalay Castle? None other than the celebrated Fior himself, the universal dictator of men’s and women’s fashion. A grand ball is scheduled to be held at the castle, with a fashion show during which the master will launch his latest creations. Thus, while Albertine dreams of nudity, Clothes, Fashion, and Chic begin to reign supreme under Fior’s command! […]
Hufnagel, a count and horse lover, offers him his advice. Let’s invite the guests to collaborate, he says. Let’s make it a masquerade ball and make those who wish to take part in the fashion contest put sacks over their garments of the future, which they themselves will have designed. At a given signal the sacks will fall, the jury will award prizes for the best creations, and Master Fior, enriched by these ideas, will decree the fashion for the years to come. 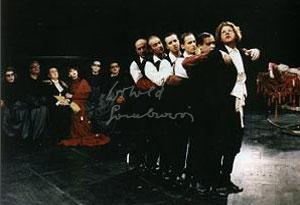 Wojciech Malajkat as Master Fior. Production directed by Jerzy Grzegorzewski, Warsaw, 2001.
Damnation! For Hufnagel is neither Hufnagel, nor a count, nor a horse lover! No, he is Joseph, the Prince’s former valet who, after having been dismissed in the past, has now become an agitator and revolutionary agent! Ha, ha, ha! Brought into the castle under a fictitious name by the Marxist Professor, this terrorist in disguise is seeking, under the pretext of a Masked Ball, to smuggle into the castle a bloodier Fashion, a more terrifying Style … he wishes to sow rebellion among the Lackeys who until now have been polishing and waxing shoes…. He wants a Revolution.

The Ball at the Himalay Castle.
The guests who are going to compete for the New Fashion arrive with their sacks.
Charmant brings Albertine. Weighed down with clothes (for Charmant, instead of undressing her, dresses her) and still under the spell of the pickpocket’s touch, she continually falls asleep … and dreams of nakedness … and even calls out in her sleep to nakedness….
This drives Charmant and his rival Firulet insane. Charmant has come to the ball with his pickpocket on a leash…. To keep an eye on him? To keep him out of mischief? Or is he perhaps jealous of the pickpocket’s uninhibited touch, titillated and excited by the thought that the pickpocket can get into everything with his thievish fingers? … His rival, Firulet, also has a pickpocket on a leash.

“… For what would happen if the common people discovered that our ass is identical to their own?”

Incapable of responding to Albertine’s sleepy appeal, Charmant and Firulet begin mocking one another, and a tragic desire for self-destruction drives them to a duel. Finally, when the Ball has unfolded itself in all the splendour of its costumes and masks, the desperate rivals unleash their pickpockets: let them do as they please, let them steal, let them poke into everything!....
Mayhem. Panic. The pickpockets steal at random with the guests, not knowing who is touching and tickling them, begin to squeal and go wild! Amid the general breakdown of manners and the disarray of costumes, Hufnagel, the horse lover and terrorist, gallops forth at the head of the Lackeys … Revolution! 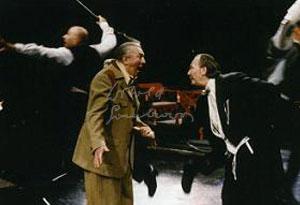 The Ruins of Himalay Castle.
Revolution.
The wind of History.… Quite a long time has passed. It is now after both world wars and the revolution.
Man’s clothing has gone berserk…. In the wind, amid flashes of lightning, the weirdest disguises become visible: the prince as a lamp, the priest as a woman, a Nazi uniform, a gas mask…. Everyone is hiding; no one knows who anybody is….
Hufnagel the rider, leading a squadron of Lackeys, gallops about in pursuit of the fascists and the bourgeois.
Meanwhile, Master Fior, in a state of shock and bewilderment, tries to get his bearings somehow at this new Fashion Show.
The fascists who have been caught are then put on trial. In vain are Fior’s demands for a normal legal procedure. Storm! Storm! A violent, gusty wind….
But what’s this?! What’s this?! Charmant and Firulet come in chasing butterflies, followed by a coffin carried by two gravediggers. They relate their tale of woe: during the ball, Albertine disappeared, and all that was found were the numerous remnants of her wardrobe! The pickpockets likewise vanished. Convinced therefore that Albertine had been stripped of her clothes, raped and murdered, they have set out into the world with their coffins in order to bury the naked body of Albertine. 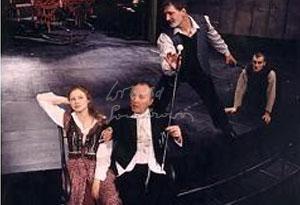